James Ajaka is the CEO and ‘Chief nudie’ of nudie, the Australian-owned, Australian-grown fruit juice company that makes its product from nothing but real fruit. From its earliest beginnings in 2002 to a day of reckoning in 2004 when their factory burned down, this is the story of how nudie began to grow into what it is today – a company with 29.7% of the market share and a ream of world-firsts under its belt. 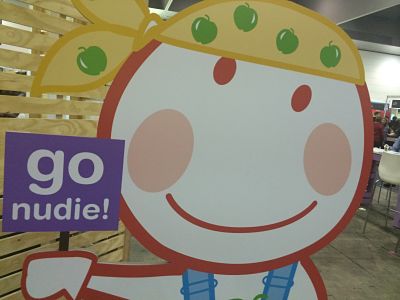 In August 2002, Tim Pethick (founder of nudie) approached me and said, ‘I want to start a fruit juice company. Would you like to start it with me?’ Effectively, I was to be nudie’s first employee with options in the business.

I met with Tim about eight times in total. The first three or four times, I wasn’t entirely engaged or convinced that the opportunity existed. Then I learned that the big fruit-juice category in Australia is worth about a billion dollars, and that it was dominated by two major players. Both of them at the time were Australian-owned but the products on the shelf were primarily made with concentrate. They contained preservative, added flavours and colours and, to varying degrees, fruit from overseas.

Thinking outside the square

The second thing the majors would compete on was advertising. We certainly didn’t have an enormous financial base from which to launch a business with a big marketing campaign or advertising campaign, so again, this was not something we could use to compete.

The third thing is price. If you’re starting a business and you’re launching into a fiercely competitive category, competing on price is not very sustainable. It is usually quite a short and expensive experience.

The early days of nudie

I remember in my first week, we made 1000 bottles and only sold forty. The nights we would make those bottles, I’d go home with fruit-soaked clothing. I’d put them all in a plastic bag so my car wouldn’t get fruit all over it and I would literally drive home in my underwear.

All those bottles we didn’t sell, we gave away to people; at train stations, beaches, outside universities etc.  They then became our evangelists. They became our advocates. They became the guys who would go out there, then come back to us and say, ‘Hey, there’s this café in Rose Bay where I get my chickens, and I spoke to the owner, and he’s happy to stock your drinks’. Or they’d say, ‘We’ve got this café in Balmain and these girls came in raving about nudie juice, so we’ve got to stock your drinks, can you come and see us?’

It was fun, but it was very, very hard work. I was twenty-five years old at the time. I didn’t have a girlfriend, I didn’t have kids. Fast-forward to now, I’m thirty-seven, I have a wife, I have two kids. It’s a very different dynamic now. But in those early days, we felt like we were on a crusade. We had a very defined purpose. We wanted to reintroduce real, unadulterated fruit juice to Australians.

nudie is an Australian juice company that prides itself on providing drinks made with the best natural ingredients – with no nasties. By keeping things simple, the much-loved brand has learnt to trust its instincts and value its identity. The aim? To taste good, have some fun and do some good.

The rise of meaningful storytelling in business

Join our global community, become part of the movement.

Sign-up to read our latest ebook and receive our weekly issue of Threadbare – featuring interviews with business leaders on values, purpose, and the notion of success. Together, we're putting humanity in business to connect the world to what really matters, one story at a time.
We value your privacy and would never share your email address.

Send this to friend